Showing posts from 2017
Show all

November 29, 2017
A trio from Chicago, Monakr consists of Saam Hagshenas, Jonathan Marks, and Matthew Santos.
Here, they give a little insight into the band.


1. What inspired you to get together and start a band?

We had all known each other through the Chicago music scene, our bands had played together, etc. There was a little talk of working in some capacity. In 2014 Saam had written a few songs he wanted Matt to sing on, and they got in the studio. They both liked the result so much they decided to turn it into a band.

2. Who are some inspirations for the band?

3. Was there a deliberate construction in the outcome of the songs?
Not really, every song is different. Some pour out all at once, some are different ideas that come together from different places and times. We knew the mood for this project was a bit more somber than former projects, but I wouldn’t say that influenced the writing process. They’re just songs. 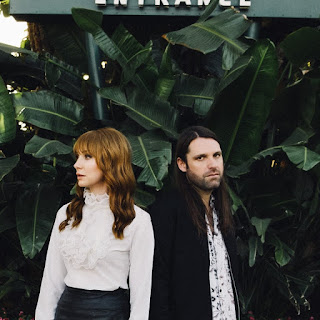 Tashaki Miyaki are a duo consisting of Lucy on drums and vocals and Rocky on guitar. Based in Los Angeles, they formed out of a late night jam session, and here Lucy gives some insight into the band that goes by the name Tashaki Miyaki.


1. What inspired you to form a band?
I had been making demos on my own and was really wanting to play with other people and hear that sound. At the time I didn't really have a plan to form a band...I didn't know what the outcome would be. I was making recordings with my friend Joel Jerome and then Rocky came one day and we basically recorded our first EP in a day. We did drums, guitar, and vocals live in a couple takes and then overdubbed percussion and more vocals. The band was pretty much born in those sessions. After our first trip to the UK in 2011, which was essentially our first tour/shows, we realized we needed a third person to fill out the sound. Dora was someone I had played in bands with in the past and who I really trust musicall…
Post a Comment
Read more

Maximo Park are a 4 piece consisting of Paul Smith - vocals, Duncan Lloyd - guitar, Lukas Wooller - keys, and Tom English - drums. Based in Newcastle upon Tyne, they are a band with an alternative/indie vibe and sound. They create soaring melodies melted with intricate lyrics.

Here, Tom gives some insight into the band.

1. How did you guys approach this record compared to the others?

It's the first time we've self produced an album. We fell into it by working on a few songs at the end of 2012, intended for an ep in 2013. We did them in Field Music's studio in Sunderland. They're old friends of ours and they helped out a lot on those songs. The label heard them and just told us to keep going, abandoning the idea of an ep. Meanwhile, our own studio space in Newcastle had been renovated and we were able to upgrade our recording set up. So we moved back in and finished the job over the course of last year.


2. Was there anything new you wanted to try out or perhaps,…
Post a Comment
Read more
More posts