Showing posts from 2009
Show all

Scott: We just wanted it to sound like the four of us in a room, playing the songs. The first album was recorded with some well-respected producers- Stephen Hague and Simon Barnicott- which was a great experience,…
39 comments
Read more 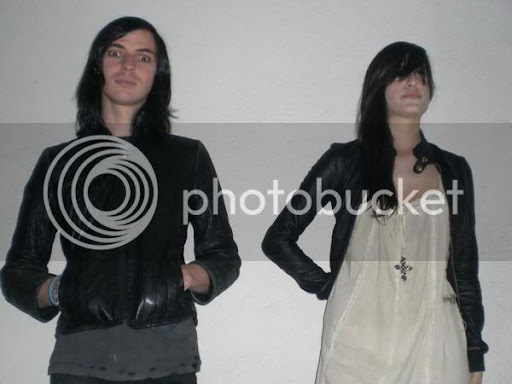 IO Echo are a band based out of Los Angeles (with the occasional Brit [who also plays bass for The Big Pink.]) Mixing together dark, pulsating sounds, encircled by an eerie texture, creates the haunting music of IO Echo.
IO Echo are IO on vocals, guitar and keyboard, Leopold Ross on guitar, and as part of the live band : Paul Rinis on drums, Aram Kirakosian, and Salvatore Romano on tambourine and keys. Here, IO herself delves further into the mystery that surrounds all things IO Echo.


1. Would you consider io echo a solo project?

io echo is the collaboration between myself and Leopold Ross. As time has elapsed we have begun collaborating more with the band.


2. What is the background of the band and how was the band started?

Leopold and I met at a seance. I raised him from the dead and he followed me home. I was thinking about starting a band at the time, so I told him he might as well make himself useful if he was just going to be hanging around. Leopold said that Jimi…
Post a Comment
Read more 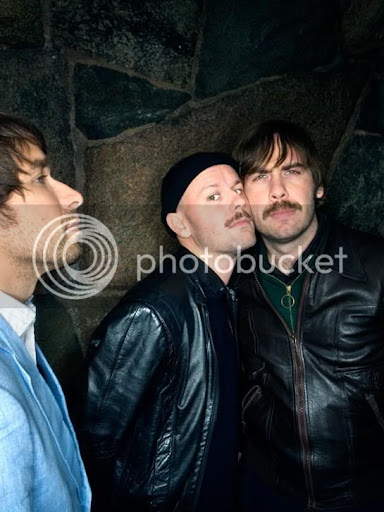 Peter Bjorn and John are a Swedish band formed in Stockholm, named after the band members: Peter Moren - guitar/vocals, Bjorn Yttling - bass/vocals, and John Eriksson - drums/vocals. Peter Bjorn and John's sound borders on lo fi and indie, and blends various sounds to make up their own, and with an upcoming album being released early next year (March), Peter was kind enough to share some insight into PBJ.


1. How would you compare the music scene in Stockholm to another major city and what would you say are the differences?

Peter: Stockholm is relatively small, so everyone knows everyone and there are a couple of places where most of the concerts take place. But maybe that's true for most cities? Still its a pretty diverse scene with a lot of different styles, freejazz, heavymetal, folk, indie etc. Since it's the biggest city in Sweden people move here from other places so it's a good mixture of people with different background as well. 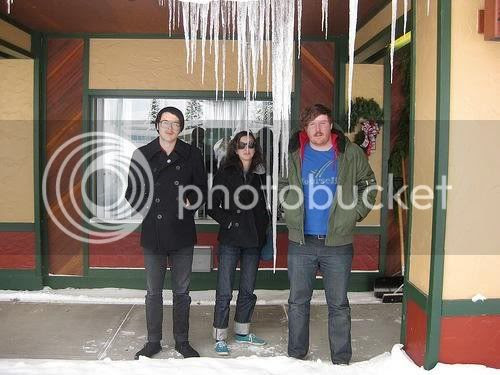 Los Angeles based three piece Woah Hunx consists of Katherine Petersen - vocals, (Dirty) Preston Olson - guitar and Jonathan Harry Weinberg (Matzah) - drums. Putting together their sound, the end result is a blast of frantic noise ready for any party. Here, the band discusses the ever pressing issues that may be on any and everyone's mind.


1. Where is everyone from?

Preston: I am from Moorhead a small town in Minnesota right next to Fargo on the border of the state. Sounds horrible, but it wasn't that bad. Our high school football team was Moorhead Spuds. A spud is a potato, so our mascot was a guy in a big potato costume.

Katherine: I've been to Moorhed with Preston...the high school mascott is actually a guy in a Preston costume. He's just being humble. Oh, I'm from sunny so cal.


2. How did you get interested in starting a band?

Matzah: Everytime we'd get drunk together, we'd joke about doing it. One da…
Post a Comment
Read more 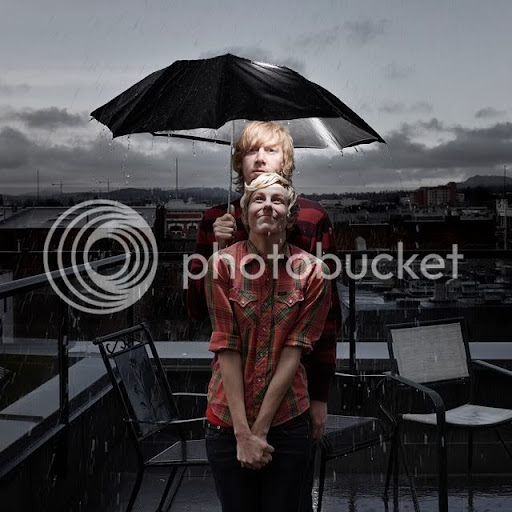 Kate Cooper and Damon Cox make up the band An Horse from Brisbane, Australia. Mixing their blend of guitar and drums to craft songs that become ingrained in your mind, their style mixes in with different influences to create a soundtrack of the summer (winter or fall.) Kate was kind enough to take some time out to chat and discuss all things An Horse.


How would you describe the music scene in Brisbane compared to the US?

"Brisbane is a really small city, and has a very strong community; that's what Damon and I love about the states, it's really big and in the US you can tour and tour..."


Were there any other names for the band floating around?

"We didn't even think about it, it was good, we didn't have to have one of those -what should we call the band things." It was a name Kate used for solo shows around Brisbane.

Previously one half of Death From Above 1979, Sebastien Grainger is now following his name as his new(er) moniker. With a diversion from previous sounds, the solo material takes various twists and turns, with a positive end result. Here, Sebastien discusses some of what went on during the process.


1. How was the transition going from DFA1979 into your current band and was it a natural progression?

The transition began the moment i decided i didn't want to do DFA anymore. I had this hazy vision of what kind of an artist i wanted to be, and i felt like i needed time to develop that vision. My whole approach to music and art has always been from a humble perspective. I always feel like I'm learning. The flip side of that is that i never feel like i've arrived. Sebastien Grainger & The Mountains is/was my statement of what i think a rock band should sound like. My next approach will be drastically different, but as an artist i feel like i'll be abl…
Post a Comment
Read more


3. What is the process of creating a song for you, what kind of a…
1 comment
Read more

Tilly and the Wall 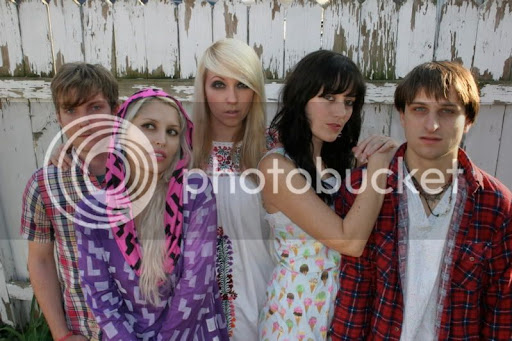 Bright. Colourful. Fun. Tilly and the Wall, the five piece based out of Omaha are compromised of Kianna - vocals/bass, Neely - vocals/bass, Derek - guitar/vocals, Jamie - tap dancer/percussionist and Nick - keyboards. Mixing harmonies, beats, and melodies, Tilly and the Wall create a dynamic sound that is perfect for singing (or shouting) along to, tunes that are wrapped with ample amounts of exhilarating energy. Here, Kianna shares some details surrounding the wonderful world of Tilly and the Wall.


1. Did you always have the intention to use tap dancing as a form of percussion or incorporate it into the songs somehow?

Not really, it's just something Jamie had done in prior bands and used at the first Tilly practices to keep a beat. We never really discussed it but it just stuck! It was totally meant to be... kismet.


2. Team Love and Saddlecreek records both seem like very tightly knit and nurturing labels; how has that been working within that environment? 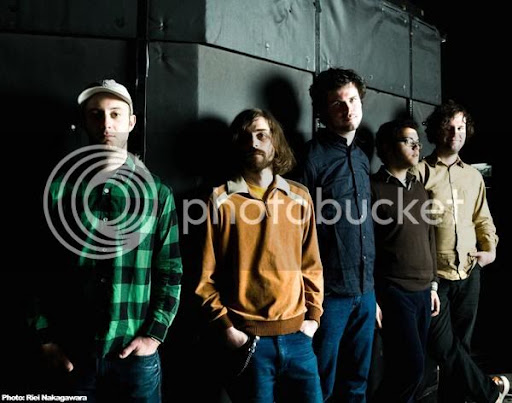 A five piece from Halifax, Nova Scotia, Wintersleep are made up of Loel Campbell - drums, Paul Murphy - guitar/vocals, Mike Bigelow - bass, Tim D'Eon - guitar/keys, and Jon Samuel - keys/guitar/vocals. Meshing the heavy with the light to find the right amount of each colliding together, Wintersleep's music can start off in one direction, while smoothly leading up to another by the end of it. This mixture forms their sound to balance out what doesn't go missing within their music. Here, Paul delves into Wintersleep's core for a bit of insight.


1. How do you feel/think being from Halifax differs or compares in terms of the setting and interaction with other bands, than say more mainstream or popular Canadian cities such as Montreal , Toronto or Vancouver ? Or do you think there even is a difference music wise?

Halifax has a bit more of an insular music community than those other cities I think.. Kinda keeping to itself a bit but I think not necessarily in…
Post a Comment
Read more 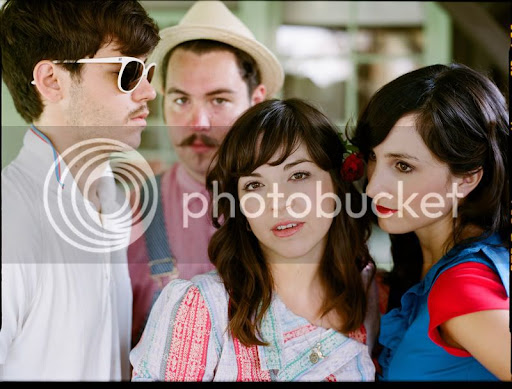 With their free flowing melodies and harmonies, The Whispertown 2000 are a four piece based in Los Angeles; made up of Morgan Nagler, Tod Adrian Wisenbaker, Vanesa Corbala, and Casey Wisenbaker. They mix retro classic sounds with a twist of folk to create their own sound. Their first album - Livin' in a Dream was released in 2006, while their current record - Swim, was released in 2008. Morgan was kind enough to take some time to give us a peak into The Whispertown 2000.


1. How is a song created and what sort of approach do you take?

Usually, I write the song on guitar and bring it to the band, where it then tuns into what it is by everybody's shaping and morphing.


2.Do you prefer to play to a smaller or larger audience or venue?

I like a little room packed in where I don't know anybody.


3.Having known Blake and Jenny, what kind of advice did they give you as far as writing and preforming goes? 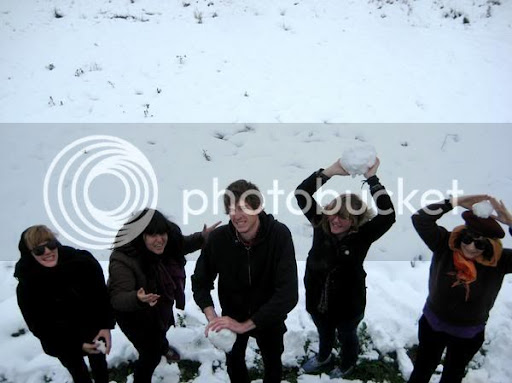 Infusing sounds and clashing noises, Mika Miko are a five piece band based out of Los Angeles California. The band includes guitarist Michelle Suarez, bassist Jessica Clavin, drummer Seth Densham, and duel vocalists Jenna Thornhill (also saxophone) & Jennifer Clavin (also guitar). Their music combines influences and beyond to create a wild ride of ruckus. With a new album to be released soon, Michelle took some time to answer some questions about what makes up Mika Miko.

1. Can you tell us how the band came about, where everyone is from and the drummer changes..


2. Who or what are some influences for the band?

We all really appreciate music. All of us have different influences: people, music, food, clothing, books, etc.


3. What is the songwriting process like for you guys?